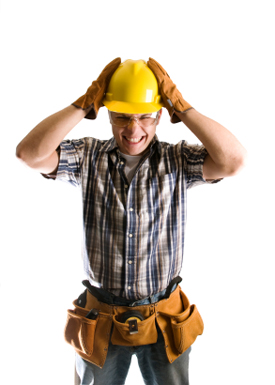 DIY Financial Planning – The real costs may not be evident

DIY Financial Planning appears to be a low cost alternative

There are a lot of smart people who make some rather dumb choices with respect to their finances. More often than not this is driven by short term thinking and the desire to save an immediate out of pocket expense. There is often a failure to lift the eyes and see the bigger picture.

The Typical DIY strategy – Pay off the mortgage, then what?

For those DIY financial planners who have paid off their mortgage, there is suddenly a whole lot of extra cash flow coming in the door. Usually, this extra cash is accumulated in a cash account until it starts to get a little too high.

It’s at this time that the decision making process can get a little twisted. The desire to do something with this money, driven largely by the emotional pain of accumulating “lazy money”, exposes many DIYers to an unplanned (ad hoc) investment strategy. It usually results in a “luck of the draw” situation that’s driven almost exclusively by the specific opportunities that happen to show up around this time.

After years of working hard to pay off the mortgage, there is a well earned feeling of freedom. However, it can lead to a bit of a spending splurge. The smart choice is to develop a new plan prior to the expiry of the old plan, (paying off the mortgage), otherwise you get left in no man’s land. The longer you spend here the more costly it’ll be in the long run.

We encourage our clients to consider adding some additional money to super via post-tax contributions. This can be challenging as it may require you to lock away your investments for a relatively long time. It requires a new way of thinking from the “mortgage pay off” strategy where access to liquidity was relatively easy (via loan redraw flexibility). But you are now in the retirement planning phase and you need to think long term to get the best after tax return for your investment dollar.

You need a certain level of confidence to commit to this strategy. It requires some planning and modelling, but with the “use or lose it” nature of the super contribution caps, the benefits are well worth it. You may just realise that you’ll have more cash than you expect in the future as the kids’ education costs drop off and some inheritance money comes your way. You don’t want to rue the fact that you missed opportunities because you failed to consider the impact of these future events.

Failing to plan can be very costly

Imagine you have an extra $50,000 a year available after paying off the mortgage. Your adviser recommends that you commit to adding this to super as a post-tax contribution. (We assume you’re already making your maximum pre-tax contributions to super). Your neighbour – who we’ll assume has identical circumstances to you – decides to retain his $50,000 a year outside of super. He thinks you’re mad putting more money into super where you’ll “lose control” and cut off your flexibility for taking advantage of future opportunities.

For the sake of the argument, we’ll assume that over the next 35 years, you and your neighbour earn the same rate of return of 9.1% per annum on your investments1. We assume you both invest $50,000 a year for the next 15 years and then drawdown your capital over the next 20 years2.

After 15 years, the tax benefits of investing within the super environment mean you have $121,231 more than your DIY neighbour. That’s 7.9% more capital, which may not sound like a huge difference but it ignores the significant benefits to come.

At this time, your neighbour seeks some financial advice and realises that he has left himself with more capital outside super than he has available under his super contribution limits. As a consequence he is unable to transfer his $1.54 million portfolio into the super environment.

But he’s not concerned, as he has some significant capital gains in the portfolio and he’d prefer to avoid paying CGT3. Based on the 9.1% p.a. return, this portfolio will allow him to draw an after tax indexed income stream of $64,399 per annum for the next 20 years.

While he’s quite chuffed with this outcome, he’s not aware of what he’s foregone. The compounding consequences are quite severe, as shown in the chart below. It compares the change in capital value of his portfolio to your “super strategy” portfolio. In both cases, the portfolios sell down enough to fund an after tax (indexed) income stream of $64,399 a year from years 16 to 35: 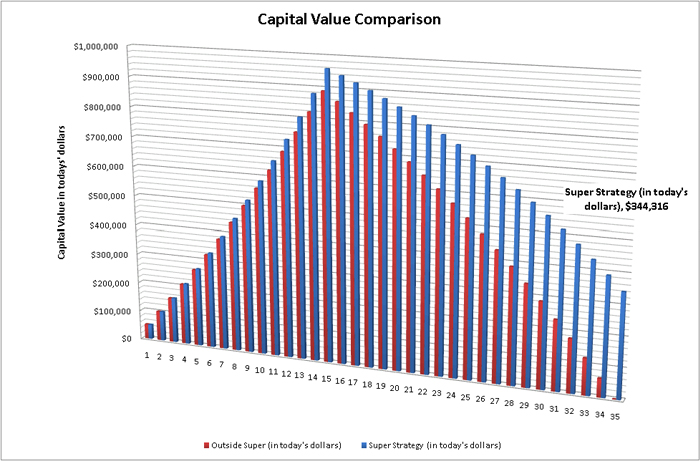 And all because you took the time to plan and commit to a smart, long term strategy that benefitted from a series of (almost certain) small wins over a sustained period of time.

The real costs of DIY Financial Planning are usually not apparent

The desire to take control and manage your own finances may be appealing and save your some money today. But the chances are that you’re missing opportunities that you’re either unaware of, or don’t have the knowledge or time to investigate. In the long run, it’s far cheaper to pay an expert to help you devise (and action) a smart, long term strategy that offers the best chance of getting the most out of your finite financial resources.