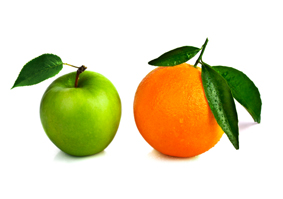 Over the six years to 2009-10 [1], baby boomers (those born between 1945 and 1964) continued to pour money into both owner occupied housing and other property. And they were happy to take on additional debt to do so.

The table below shows the change between 2003-04 and 2009-10 in the percentage of households, by age of reference person, where the homeowner has a mortgage.

The large increase in the percentage of 55-64 year olds with a mortgage is the main takeaway. This group also massively increased (in percentage terms) its total property debt over the period, as shown in the table below:

Why would households that, in our view, should be looking to reduce debt as they approach the end of their active working lives be comfortable borrowing to upgrade their homes and/or purchase investment property?

We suspect that the successful experience of many of those who made their initial foray into property in the 1970’s and early 1980’s is driving this behaviour. In an attempt to accelerate wealth accumulation prior to retirement, they have resorted to what worked in the past. Most would not realise that this past success owed heavily to economic circumstances that are unlikely to be repeated.

The table below compares key interest rate and inflation data over two 10 year periods. Period 1, from December 1973- December 1983, is used to represent the years when many of the age 55-64 baby boomers discussed above were entering the housing market. Period 2 covers the last 10 years and is representative of conditions now being experienced by both baby boomers’ children and recent baby boomer borrowers.

To examine them, let’s look at the experience of a borrower with a current $200,000 household income (in today’s dollars) that grows with average weekly earnings under both environments, assuming the lending bank:

The following chart shows how loan repayments [2] fall as a percentage of income over ten years, depending on whether the borrowing starts in December 1973 (Period 1) or December 2001 (Period 2). 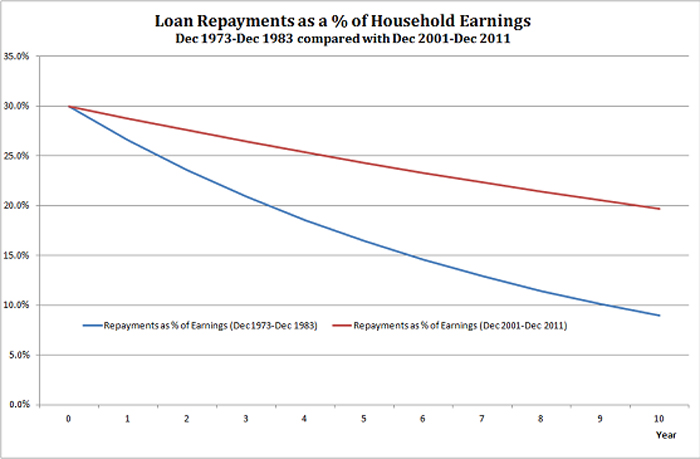 The high growth in earnings over Period 1 means that after 10 years loan repayments have fallen to 9.0% of earnings compared to 19.7% under Period 2 conditions. Effectively, high inflation, in excess of interest rates, helps to quickly erode the value of the borrowing and repayment requirement.

Another way to see the beneficial effect of high inflation/low real interest rates for borrowers is to examine the change in owner’s equity. The chart below assumes the value of the home grows at the inflation rate for each of the 10 year periods: 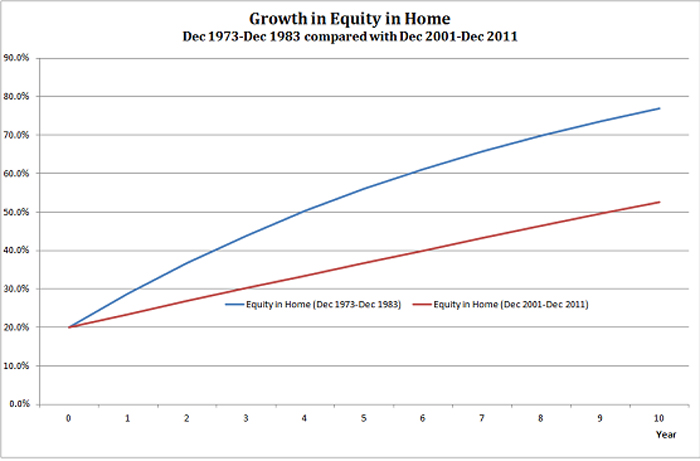 Under Period 1 conditions, the borrower’s equity is almost 77% after 10 years, compared with 53% for Period 2. The capacity to borrow more to upgrade is considerably greater in Period 1.

A second factor (in addition to negative real interest rates) enhancing the baby boomer’s housing experience was the fall in actual interest rates that has largely applied since the late 1990’s. Given the borrower’s initial income and bank lending requirements discussed above, a drop in the average interest rate from 10.5% p.a. to 7.3% p.a. would allow an increase in the maximum loan from about $520,000 to $680,000 – a 31% increase.

It is difficult to say whether this increase in the availability of finance due to interest rate falls, coupled with greater access to finance as result of deregulation, caused a once off increase in housing prices that existing owners benefitted from. But it certainly facilitated the rise in housing prices seen in the first decade of this century.

We don’t know what the future holds. But we think that there is a very low chance of

Therefore, the likelihood that borrowing to purchase property will provide both ageing baby boomers and their children with similar windfalls in the future as provided in the past is remote.

We find it very concerning that a high number off 55+ year olds are apparently pinning their future on borrowing and history repeating. It is the extreme opposite of what we would regard as prudent wealth management.