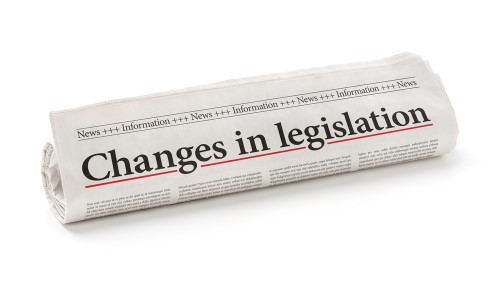 We have previously discussed our “Personal Financial Dashboard” that graphically captures where a client is on the road to their version of financial independence. A key dashboard measure is the so-called Tax Effectiveness Ratio (“TER”), calculated as the ratio of superannuation holdings to total Projected Lifetime Investment Wealth.

Because of the tax effectiveness of the superannuation environment, we encourage clients to target a TER of at least 75% to be achieved by retirement. For some high income/high net worth clients or for clients who have delayed maximising super contributions, increasingly restrictive contribution caps may make this an impossibility.

Proposed changes to superannuation announced in the 2016-17 Budget, if legislated, will further restrict the ability to accumulate investment wealth in super. The major proposed adverse changes for accumulation[1] include:

While the Government claims that 96% of individuals with superannuation will not be adversely affected by the changes, those who are currently on or likely to earn high incomes will be worse off. The rest of this article examines how the proposed changes would affect the amount a 25 year old high income earning professional could accumulate over a 40 year career (to age 65), based on the assumptions outlined below.

The following are the key assumptions for the analysis:

The chart below shows the projected income path (left hand axis) and maximum concessional contributions, net of tax, (right hand axis) under both the current and proposed arrangements. 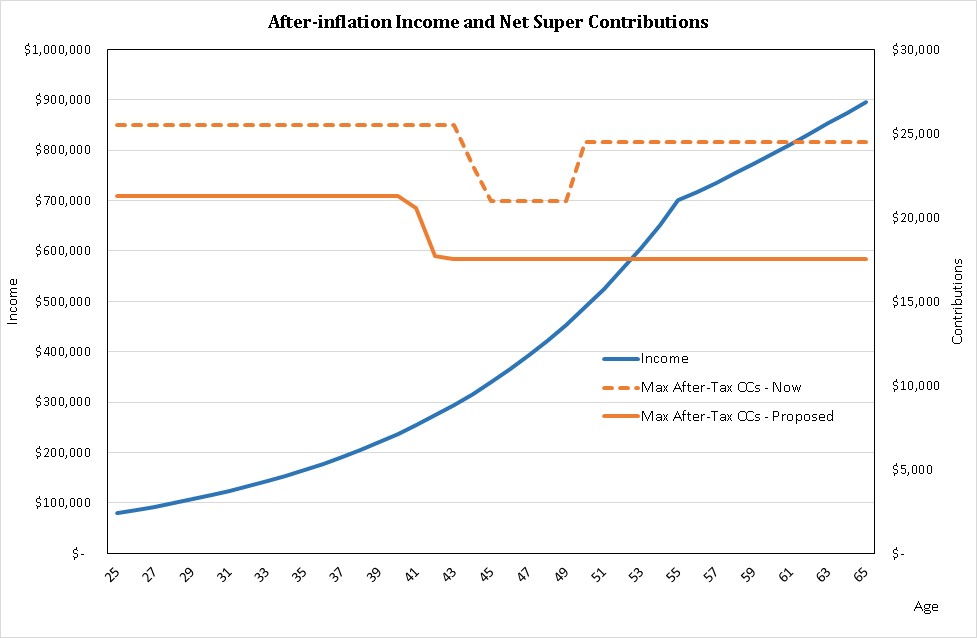 Initially, assuming no non-concessional (i.e. after-tax) contributions are made, superannuation balances will grow over the 40 year career as revealed below: 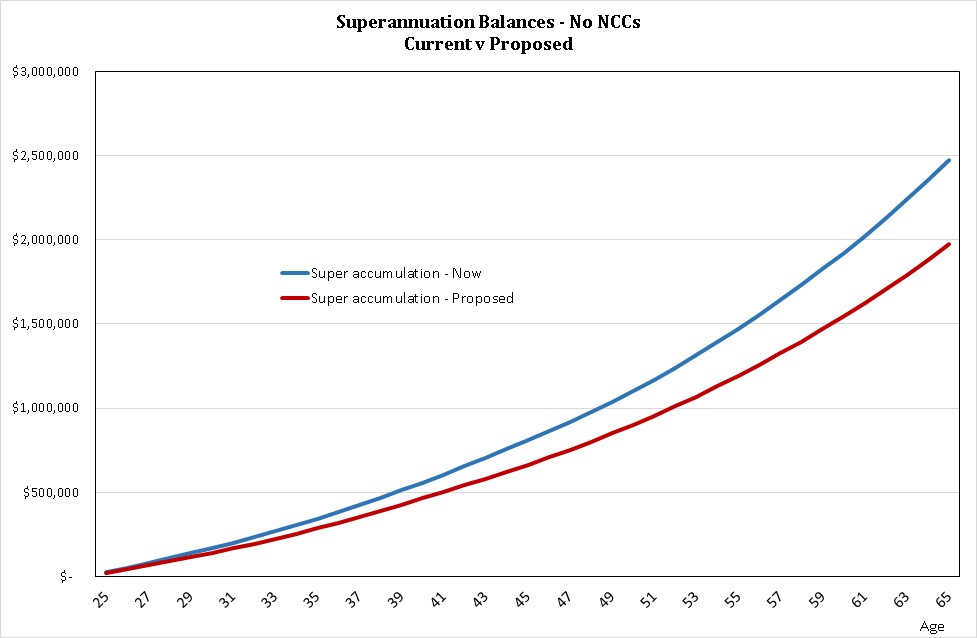 The proposed changes mean that our young professional will be able to accumulate about 20% less in super than is possible with the current arrangements. This shortfall may not be regarded as a major concern.

However, if the intention is to direct as much surplus cash flow after age 55 to super in the form of NCCs as possible, the proposed $500,000 lifetime cap places a significant restriction on the amount of wealth that can be accumulated in the super environment. Below, we show the total (net of tax) contributions that are able to be made under the current and proposed arrangements: 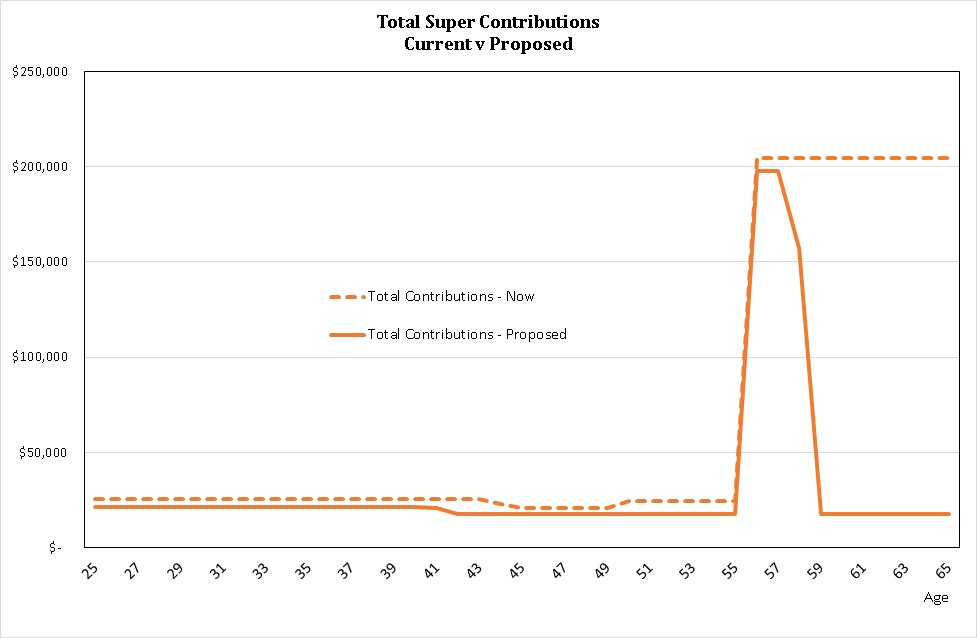 The implications for total superannuation accumulation of the NCC restriction are revealed clearly in the following chart: The theoretical maximum accumulation under the proposed arrangements is almost 40% less than would be possible under current arrangements! For the illustrated situation, our young professional will be forced to undertake a significant component of intended wealth accumulation outside the almost certainly more tax effective superannuation environment.

The proposed super changes serve to confirm many people’s suspicion of super as a wealth accumulation environment. However, while they will restrict the amount that can be contributed, they have not greatly undermined the tax effectiveness of the super environment for most high income/high net worth individuals.

If the proposals become law, a TER above 75% will become increasingly difficult for many clients to achieve. Regardless, we will continue to encourage them to take maximum advantage of the concessions that are available.

For younger clients, in particular, an often made decision to forego maximising contributions in order to preserve cash (e.g. to meet mortgage payments) will need to considered even more carefully. A significant reduction in total potential contributions, combined with the “use it or lose it” nature of concessional contributions, increases the cost of such a decision.

Our view is that the proposed changes will not change superannuation’s status as the preferred wealth accumulation environment. However, they do imply that for many high income/high net worth people an increasing proportion of their wealth will be held outside the super environment, either in personal names, companies or family trusts.

[1]  There are also proposed major adverse changes to superannuation pension arrangements that are not discussed in this article.