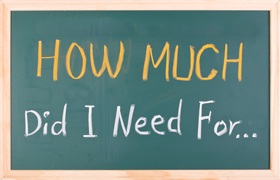 Will spending remain constant in retirement?

“Rule of 25” based on restrictive assumptions

In response to the often asked question, “How much do I need to be able to retire?”, as a rough “rule of thumb” we suggest that you need to accumulate investment wealth of at least 25 times your expected annual retirement spending (the “Rule of 25”). So, if you want to have a retirement lifestyle that costs $100,000 p.a., in today’s dollars, you should be aiming to accumulate $2.5 million of investment wealth.

Our earlier article, “What is an appropriate Retirement Expenditure Multiple?”, discussed the historical rationale for the Rule of 25. However, while we believe it provides a useful guide for accumulators who wish to become self funded retirees (i.e. no eligibility for the age pension), the underpinning analysis is based on some fairly restrictive assumptions, including:

It’s the first two of these assumptions that we focus on in this article.

Level retirement spending may not be realistic, but reasonable

Various studies conducted in both Australia and elsewhere have shown that rather than retirement spending remaining constant throughout retirement, it appears to fall with age. As shown in the chart below, median US household expenditure in 2010 for an 85 year old was around $24,000 p.a., compared with about $36,000 for a 65 year old i.e. approximately 1/3rd less. 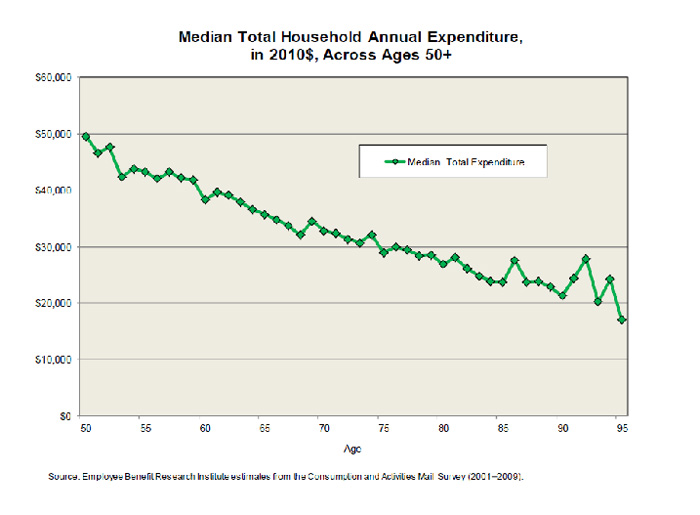 For the 30 years from age 65 to age 95, the chart implies average spending of about $81,000 p.a., rather than a constant $100,000 p.a. as assumed by the Rule of 25. The actual spending pattern of retirees therefore suggests that the Rule of 25 is likely to considerably overstate the amount that must be accumulated for retirement.

However, before jumping to this conclusion, there are at least three issues that may affect its validity:

In summary, we wouldn’t want to assume that our clients’ retirement spending will voluntarily decline significantly with age.

Another potentially conservative aspect of the Rule of 25 is that it assumes a retirement period of 30 years. As a comparison, the life expectancy of a 65 year old couple is currently only about 17.8 years. The expectation that at least one of them is alive is 28.3 years.

On the basis that a single person spends about 70% of that of a couple to maintain an equivalent lifestyle, the expected total spending of a 65 year old couple desiring to spend a constant $100,000 p.a. in retirement is $2.52 million. This compares with total spending of $3.0 million implied under the Rule of 25 assumptions.

It suggests that the couple could either spend more earlier, from accumulated wealth of $2.5 million, or take the view that they don’t need to accumulate as much investment wealth. But this implies taking additional longevity risk. There is a 50% chance they will both survive longer than 17.8 years and/or one of them will survive longer than 28.3 years.

Of course, the couple could consciously choose to take this risk and enjoy their wealth earlier, in the knowledge that they will adjust their lifestyle should they live longer than expected. However, these considerations don’t invalidate the assumption of a constant level of spending for 30 years as a reasonable starting point.

Investment returns may overwhelm other assumptions

Our view is that the “Rule of 25” should be used as a guide for accumulators, rather than an unassailable truth. Compared with “averages”, there may be elements of conservatism regarding the spending assumption and the assumed retirement duration. But our clients don’t plan for the averages.

And, of course, in this article we have not touched on the asset allocation and, particularly, US investment return assumptions. Should real returns on growth assets over the next 50 years turn out to be significantly less than those experienced since 1926, the “Rule of 25” will prove to significantly understate required investment wealth. The reality if this situation eventuates is that we will all have to adjust our expectations.