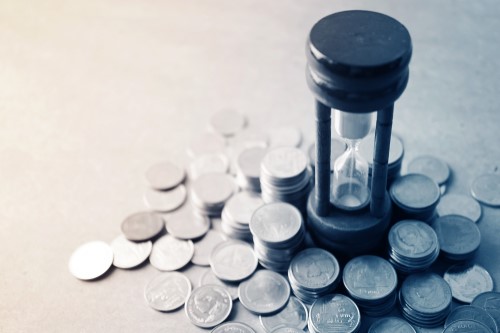 How much do I need to retire, revisited?

The “Rule of 25” sets a daunting target, for many

When we talk to prospective clients who are at or close to retirement, one of their inevitable questions is “Have I saved enough to retire?”. We explain that while we need to understand their situation in greater detail, our rule of thumb is that they should aim for at least 25 years of expected annual spending i.e. our “Rule of 25”.

So, if they expect to spend $100,000 p.a. in retirement, a reasonable guide is that they need more than $2.5 million in net investment wealth, assuming they wish to stay in their current home and have no other lifestyle assets or expected inheritances to draw on.

Unfortunately, too often, our prospective client has saved nowhere near this amount, with little prospect of doing so between now and retirement. Typically, they may have saved about 15-16 years of their expected annual spending i.e. $1.5 – $1.6 million in the above example.

It isn’t unusual for them to comment that that they are sure that many of their friends are far less prepared, financially, for retirement than they are and to ask how will such people cope. They also ask or, we suspect, think, are we too conservative?

This article provides an attempt to reconcile what we consider is Australian’s inadequate financial preparation for retirement, as individual households, with a less daunting picture from a national perspective.

First, we provide some further substantiation for what we call the “Rule of 25”. We have discussed the rationale for the rule in detail in a number of previous articles, including “What is an appropriate retirement expenditure multiple?”, “Have you enough investment wealth to support your desired lifestyle spending?” and “What level of sustainable income can you expect from your retirement portfolio?”.

Also, as further support, using a simulation technique called Monte Carlo and some reasonable, history based, investment assumptions[1] , we are able to estimate the chances of running out of investment wealth over a 30-year retirement period for initial wealth that is calculated as a multiple of desired annual spending. The chart below provides these estimates for multiples ranging from 10-30 times annual spending for a 30-year retirement. 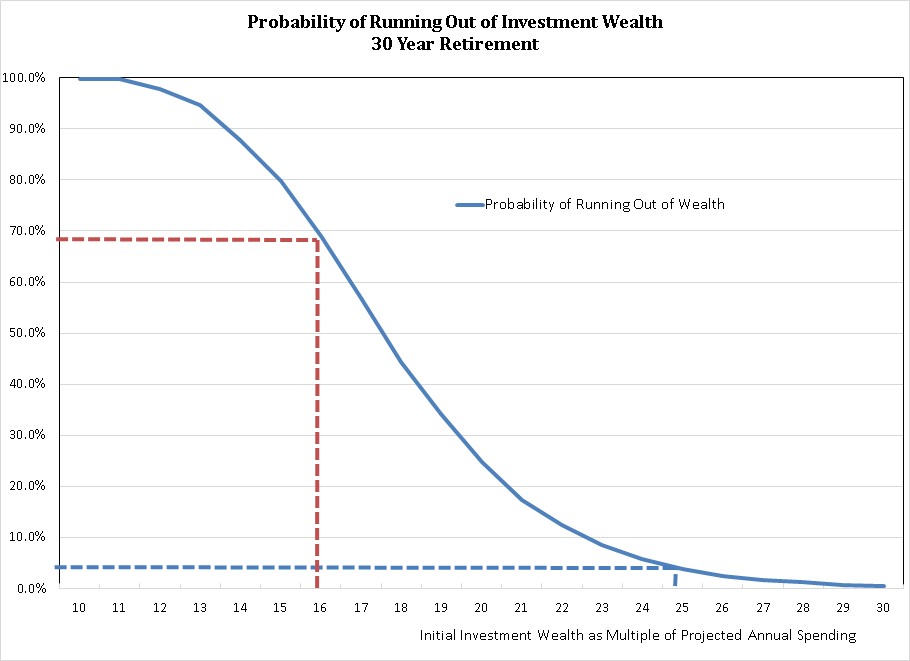 While this type of analysis is a little unrealistic (e.g. people would probably adjust spending downward to conserve wealth, access to the age pension is ignored), it provides some relativity of the “financial comfort” associated with the amount of wealth required to support desired levels of spending for, in this case, 30-year retirement periods. And it is apparent that initial wealth equal to 25 times projected spending provides a lot more “financial comfort” and flexibility than initial wealth of 16 times.

So, if 25 times projected annual spending is regarded as a reasonable investment wealth target to fund a desired retirement (and there are many experts who suggest this is insufficient), and most Australian households will not accumulate anywhere near this amount, does it mean that as a nation we are destined to lead impoverished retirements with massive dependence on the age pension.

It is important to understand that our “Rule of 25” guide is based on financing a certain 30-year retirement i.e. a 65-year old retiree living to 95. But the reality is that most people will not enjoy such long retirements. Australian life expectancy tables estimate only 8.8% of 65-year old males and 16.4% of 65-year old females will live to age 95. More relevant, the charts below show for a retiring couple, both currently aged 65:

• the probability that both partners are still alive for ages 65 to 95; and

• the probability that at least one partner is still alive, for ages 65 to 95. 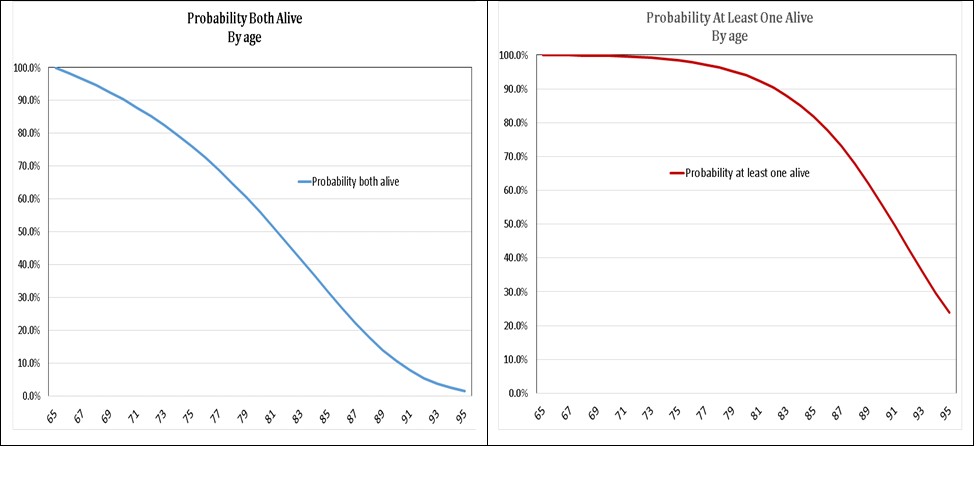 The first chart reveals the chance that a couple both survive 30 years from age 65 is only 1.5%. Chart 2 shows that the chance that at least one of a couple survives to age 95 is a higher 23.8%, but much lower than the 100%, both partners surviving, implied by the “Rule of 25” analysis. 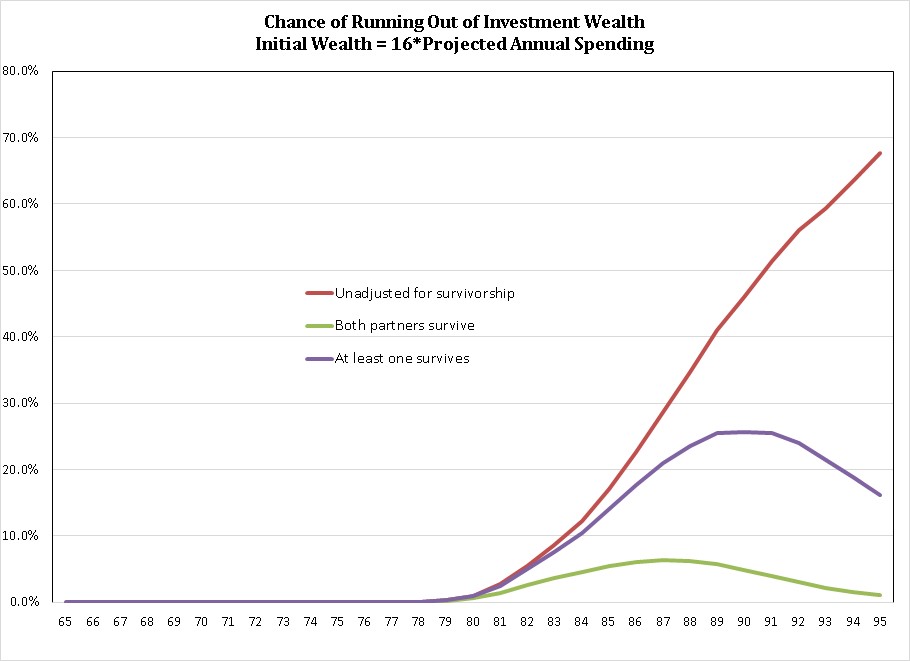 The “unadjusted for survivorship” line is the risk of an individual household running out of investment wealth, assuming they survive 30 years (i.e. from age 65 to age 95), based on the Monte Carlo analysis discussed earlier. It is uncomfortably high and rapidly rising, beyond about age 83.

However, when life expectancy is taken into account, the risk at a national level is less worrying. Based on the likelihood that at least one partner survives, the risk of running out of wealth peaks at 27% at about age 90 and then declines. It falls after age 90 because the reducing chance of survival more than offsets the increasing chance of running out of wealth, assuming survival beyond age 90.

When the assumption is that both parties survive, the risk of running out of wealth is an even lower 7%, at about age 87, declining to almost zero by age 95.

But we plan for our clients to be above average

While policy makers can rely on life expectancies when considering national retirement preparedness, we don’t advocate that individuals do their financial planning based on averages. Should you live longer than the life expectancy tables suggest and/or the investment return assumptions used for the Monte Carlo analysis prove optimistic, your chances of outliving your wealth could be much higher than indicated by the adjusted for life expectancy graphs discussed above.

We prefer to plan for our clients to lead long retirements and, as best we can, free from financial concerns. The “Rule of 25” provides a good starting point for discussion about the amount of initial wealth required that then may be modified depending on factors such as expectations regarding longevity, risk adjusted investment returns, investment risk tolerance, spending patterns and estate intentions.