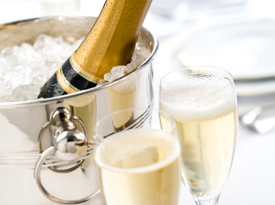 Why are most millionaire doctors and lawyers Income Statement Affluent?

Doctors and lawyers are inefficient at turning high incomes into wealth

In both his most recent book, “Stop Acting Rich”, and his previous best selling books, “The Millionaire Mind” and “The Millionaire Next Door”, Dr Thomas Stanley, US researcher of the behaviours of wealthy people, distinguishes between millionaire households that he calls Income Statement Affluent (“IA”) and Balance Sheet Affluent (“BA”).

Stanley defines millionaires as those holding more than $1 million in net investment assets. The family home and other lifestyle assets are excluded from this measurement, as they are seen primarily as sources of consumption rather than avenues to true financial independence1.

IA millionaires are households with both high occupational status and high consumption lifestyles. They become millionaires because of their ability to earn high incomes, rather than through a focus on “serious financial planning, wise investing and being frugal”, characteristics that typify BAs. Stanley categorises most doctor and lawyer millionaires as IAs.

Why are doctors and lawyers wealth inefficient?

Why are doctors and lawyers, as a group, relatively less efficient in turning high incomes into wealth? As Stanley notes:

“The road to becoming rich via the IA method is lined with income tax tolls and consumption inspired roadblocks”.

Why does this matter? Stanley claims that:

“… in reality, increased spending does not make one more satisfied with life overall. For many people, it actually has the opposite effect. But, conversely, who are those who are happy? Typically they are those who spend below their means while building wealth and ultimately becoming financially secure.”

If financial security is the goal, the Jones’ need to stop keeping up

To provide some feel for this trade-off between spending and wealth accumulation let’s look at the not unrealistic position of George Jones, a fictitious 50 year old partner in a top tier law firm. The family has an annual household, pre-tax income of $1.2 million that is tax effectively split between George and his wife. They have a net worth of about $6 million, comprising essentially their home (and other lifestyle assets) worth $5 million and net investment wealth of $1 million.

The family has a very nice lifestyle, spending about $400,000 a year and saving almost $310,000 (tax absorbs the rest of their income). George and his wife drive prestige cars, they dine out often, go on luxury holidays, purchase high end clothing and other consumer items and fund their children’s education and acquired expensive tastes. The Jones’ think they are doing pretty well. In Stanley’s terms, they are IA millionaires – a “glittering rich” lifestyle, but relatively little financial wealth accumulation.

George’s law firm requires all partners to retire by age 60. George assumes he will be financially independent by then, able to support his current lifestyle indefinitely. As a rough rule of thumb, this requires him to accumulate net investment wealth of 25 (i.e. “the target retirement expenditure multiple”) multiplied by his desired financially independent lifestyle expenditure by his age 60 i.e. a sum of $10 million. 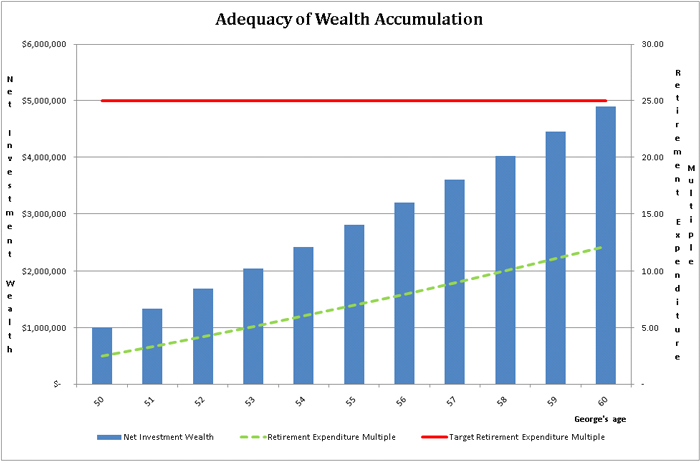 In summary, his wealth accumulation will fall well short of his goal: net investment wealth of a little under $5 million compared with a requirement of $10 million and a retirement expenditure multiple of 12.2 versus a target of 25. For financial independence at age 60:

Some changes are required in the Jones’ thinking. Their current IA lifestyle will, at some stage, bump up against reality. Either spending will need to reduce significantly and/or George needs to prepare for a career beyond his age 60. However, it is much better to be considering the alternatives at age 50 rather than a couple of years out from compulsory retirement.

1 Free to choose, rather than have, to work to support a desired lifestyle indefinitely.

[…] on high incomes (who also may not be as wealthy as they appear and are described by Stanley as “income affluent”). But many more are pedalling hard to meet their kids’ school fees, their mortgage payments and […]