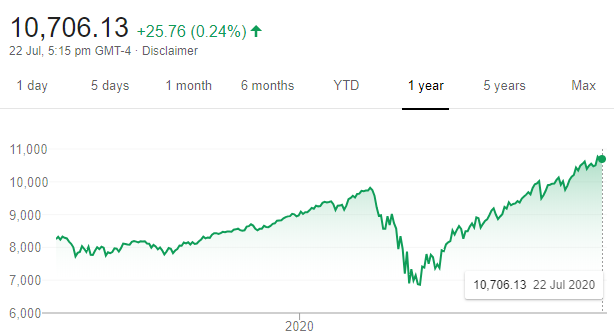 Is this the most hated market rally in history?

The recovery in stock markets around the world since the 23 March lows has confounded many and been dubbed the most hated market rally in history. It has polarised many in the investment community, with some happily benefiting from the rapid (and sometimes stellar) recovery in asset prices, while others build an arsenal of defensive assets in anticipation of a market Armageddon.

Meanwhile, the market is behaving somewhere between these two extremes.

There has no doubt been some unusual behaviour from participants. Back in October, a number of large US broking firms (Charles Schwab, Ameritrade, E*TRADE and Fidelity) reduced their commission on trades to $0. This was not an unexpected move, but it happened across the board faster than most expected. It was in part driven as a response to the free trading model offered by robo-adviser Robinhood.

This change, coupled with the lack of sports betting during the height of the crisis, has attracted a new brand of stock market participant. These new participants have earned the name Robinhood investors. Trading data provided by Robinhood indicates behaviour that differs quite markedly from large scale fund investors. They have been willing to invest in out-of-favour companies that can offer large risk/reward payoffs. The current most popular stocks traded by these investors include Ford, GE, American Airlines, Disney and Delta Airlines, all of which offer large payoffs if the economy recovers faster than expected. Whether Robinhood investors are the main reason for the irrational price movements seen during this crisis is open to conjecture.

The performance NASDAQ Composite index that tracks the price movements of companies that trade on the NASDAQ exchange has been quite staggering. Most of these companies are technology and internet related, so you would expect them to be less affected by the impact of the coronavirus, however they have not only recovered all losses from the March downturn but currently show an uplift of 30% over the past 12 months. The movement of the index is reflected in the chart below. 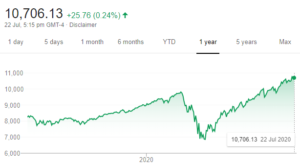 Further, the NASDAQ 100 index, that tracks the top 100 companies on the NASDAQ exchange, includes 6 companies (Apple, Microsoft, Amazon, Alphabet, Facebook and Tesla) that are now worth as much as the other 94 companies in this index. All of these companies have grown significantly since the start of the calendar year with Tesla increasing by a staggering 279%. In fact, on 13 July, at one point during morning trade, Tesla’s share price was up 16%, meaning the value of the company had increased as much in that one morning as it had through its entire life up until October 2019.

So, there is plenty of evidence of some wildly exuberant price activity that is at odds with the economic outlook.

Conversely, there are those who cannot reconcile the current market activity with their expectations for the underlying economy. Most hold a dire economic outlook and their preferred choice of investment is largely dominated by cash and gold. And gold, which is up USD $27 since the start of the year, is confirming their view.

So, we seem to have two investment extremes operating at the moment.

Whether this is the most hated market rally in history is debatable, but there is no doubt the current market seems to vary wildly from people’s expectations of where they think it should be. Perhaps we are experiencing some sort of neutralisation between both extremes, as explained by legendary investor Benjamin Graham:

From our perspective, we accept that the market can appear to be irrational. In fact, throughout history it is more likely to have appeared irrational than rational. So, waiting for the market to become rational may be an unrealistic expectation.

While we don’t pretend to be able to justify the current state of the market, and we appreciate it could go anywhere from here, we do recommend sticking to a strategy that does not make big bets on the market having to go one way or the other. In our opinion, taking extreme options is likely to increase stress levels and potentially undo a well-considered, long term financial plan.