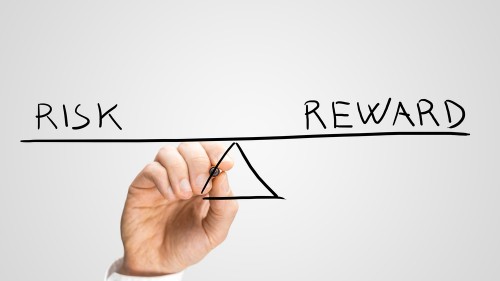 How much investment risk can you bear?

In our previous article in our series on the Personal Financial Dashboard – a graphic format that succinctly captures the journey to, arrival at and maintenance of financial independence – we discussed the need to be tax aware when investing. Financial independence is harder to achieve if there is an unnecessarily large tax leakage.

But tax shouldn’t be the overriding factor when making investment decisions. Rather, the primary focus should be on risk and related return. The Personal Financial Dashboard includes two charts which look at key aspects of investment risk management i.e.:

In this article we focus on the Growth Asset Allocation Ratio (“GAAR”). The Diversification Ratio is discussed in our next article.

Your GAAR measures the proportion of your Investment Wealth held in growth assets. Growth assets include those investments that offer high expected returns but can fluctuate significantly in price, such as shares, property and assorted other offerings including private equity, hedge funds and hybrid structures. They contrast with defensive assets that have low expected returns but with low risk e.g. cash, bank deposits, government bonds.

The Johnson’s (as referred to in previous articles) GAAR chart since they became clients in 2001 is shown below:

It reveals that the Johnsons have increased their GAAR from about 8% in 2001 to a little over 57% now. The intention is to reduce it to their target of 55% over the next three years, when John proposes to retire.

The GAAR chart brings together some key aspects of investment risk management. It illustrates that informed choices need to be made and discipline is required to implement those choices. The first consideration is the choice of an appropriate target growth asset allocation. This is the allocation to growth assets that you are comfortable holding at the time you reach financial independence. It will vary from person to person – there is no universal benchmark.

Financial independence is having sufficient wealth to fund a desired lifestyle indefinitely, without the need to work. This may or may not coincide with retirement, but is by definition the time when there is no capacity to recover from poor investment market performance through additional savings.

So exposure to growth asset markets needs to be limited, both to protect capital and ensure your emotions don’t drive you to abandon a well considered strategy in the event of a severe market downturn. In our view, your maximum target growth exposure should be no greater than your attitude to risk will allow (i.e. to be able to “sleep well”, no matter what investment markets are doing).

In calculating your current GAAR, it is important to note that it is the ratio of your growth assets to Projected Lifetime Investment Wealth (“PLIW”). As discussed in our last article, PLIW is your net investment wealth plus expected savings to financial independence.

For this measure to be meaningful, a “best guess” of future savings is required. While subject to uncertainty, the exercise forces you to link your lifestyle expectations with your long term investment risk. A failure to explicitly consider future savings in determining your current level of investment risk will result in poor decisions.

For somebody early in their career, it is likely that growth assets will be a small percentage of PLIW, since most wealth is in the form of expected future savings. In 2001, the Johnsons held only about $0.2 million in net investment wealth, with about $5.6 million of their estimated PLIW of $5.8 million comprising expected future savings.

Their growth assets of about $0.4 million at the time exceeded their net investment wealth, as they were partially financed by $0.2 million of debt. Conventionally measured, this appeared a high risk growth asset position. However, when account is taken of future savings their growth position was, in fact, very conservative. As future savings were realised over time, they needed to be predominantly invested in growth assets.

The Johnsons agreed to a maximum target growth asset exposure of 55% (and, by implication, a minimum defensive asset exposure of 45%) a number of years ago, when their actual GAAR was well below this level. The issue that this raised at the time, and is continually reviewed, is how do they strategically transition from their current GAAR to their target GAAR.

The sharp jump in the Johnson’s GAAR from 2012 to 2013, taking them above their target, reflected the combination of an unexpected inheritance of an Australian share portfolio and strong growth asset market performance. This necessitated sales of growth assets in late 2013 to reduce the GAAR closer to target.

The GAAR chart is a valuable high level investment risk management tool. It effectively captures the need to:

It also highlights the desirability of making good estimates of future savings, despite the uncertainties inherent in the calculation, to understand the true extent of your investment risk.

While GARR is primarily concerned with the allocation of investment wealth between growth and defensive assets, the subject of our next article – the Diversification Ratio – drills down a little further and highlights the risk associated with how investment wealth is held.