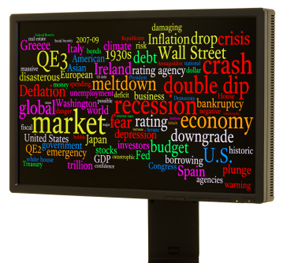 Gen Xers should be rejoicing

An article in “The New York Times” of 29 May 2012 titled “Younger Investors Jaded About the Stock Market, Survey Finds”, reported that a survey commissioned by Charles Schwab & Company revealed:

“About a third of Americans aged 18-34 said they planned to pull money out of the stock market and were most likely to “sit on the sidelines” in the next six months”.

The gist of the article was that young adults had been scarred by the stock market performance of the past 4-5 years and, accordingly, were reluctant to take investment risk. We would expect to find that Australian Gen Xers have a similar attitude.

But while it is easy to empathise with the discomfort being felt by share market investors of all ages since end 2007, we believe the appropriate response to the turbulence for most Gen Xers should be to rejoice. Except, perhaps, if they are counting on a large inheritance, funded by their parents’ diminished share investments!

On the assumptions that:

how do we think young adults should respond to volatile and negative market conditions?

A first thing to understand is that a desire to quit the share market is more likely to be based on emotion rather than logic. The experience of recent losses and fear of future losses heavily influences decisions. Behavioural scientists have shown that we tend to weight the prospect of losses about twice as much as the prospect of gains i.e. we are risk averse.

Therefore, rather than wanting to buy more risky investments as they become cheaper (i.e. when they are “on sale”), our emotions push us in the direction of selling to avoid future pain. As a result, many investors are more inclined to sell after markets have fallen and, conversely, buy after markets have risen i.e. to “buy high and sell low”.

Both the evidence and common sense suggest that this is likely to be self destructive behaviour. Ideally, a sound, long term, investment strategy should enable you to “buy low and sell high”, but at a minimum it should help you to resist making decisions based on emotion (either fear or greed).

A second aspect to bear in mind is that unless you have borrowed heavily to invest in risky growth investments, for most Gen Xers the amount held in such investments will be small when compared with their projected lifetime investment wealth (“PLIW”). And any gains or losses relative to PLIW will be fairly inconsequential.

For example, if your investment wealth is $200,000 now and all invested in shares, but you expect future savings of $1.8 million over the rest of your working life (i.e. a PLIW of $2 million) then even a 25% fall in your share portfolio (i.e. $50,000) only has a 2.5% impact on your PLIW. Looking at this bigger picture should help to prevent a sound long term investment strategy being undermined by short term emotions.

And, given that we treat future savings as a defensive asset, the Gen Xer described above is already heavily underweight growth/risky assets. So, logically, a share market decline will further reduce growth asset exposure, suggesting a need to buy additional shares at relatively low prices, rather than exit the market.

Finally, none of the above should be interpreted by Gen Xers to imply that now is a “good time” to buy shares. We have no idea what the share market will do in the future, and do not believe that anybody else does either. But we do expect that over the long term well taken risk will be rewarded and, for most people, their lifestyle expectations will not be able to be met by holding only defensive investments.

Based on this view of the world and the uncertainty regarding when risk will be rewarded, we think a smart default approach to taking growth asset risk is to spread your “risk bets” as evenly as possible over your working life (as you transition to your target asset allocation by retirement). Your response to share market volatility is then driven solely by how it affects your current asset allocation relative to your target, rather than by how you feel. Our free “Understanding Asset Allocation” eBook explains this approach in more detail.

The suggestion that young investors are jaded by the stock market indicates to us the lack of a dispassionate, long term investment strategy to guide behaviour. Perhaps, they saw share market investment as entertainment that’s no fun anymore or a potential source of easy money that has badly disappointed.

The inappropriate lesson learned is that the share market is a dangerous place and they’ll not be going back there anytime soon, or at least until things look a little more certain. In practice, this usually means shares must be considerably more expensive before they’ll consider buying again!

Historically, the rewards for taking investment risk have been substantial but volatile, with discipline and patience the prerequisites for reliably capturing those rewards. Despite no shortage of doomsayers, there is nothing to suggest to us that the future will be any different. If so, Gen Xers will need both discipline and patience to increase the chances that they will have a satisfactory investment experience.