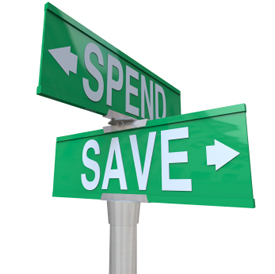 “Financial independence” is achieved when you have sufficient net investment wealth to support your desired lifestyle indefinitely, without the need for earned income i.e. work is a choice, rather than a necessity. We have always regarded the achievement of financial independence as a financial planning objective that most would embrace.

However, separate conversations that I had last week with three mid-late fifty year old professionals (who aren’t currently Wealth Foundations’ clients) really made me think that perhaps we, and our clients, were living in an alternative universe. The three admitted that within the past six months they had each borrowed between one and two million dollars either to renovate their existing residence or partly finance the purchase of a new residence.

And, apparently, they felt reasonably comfortable doing so. Either their accountant and/or financial planner had assured them that they could service the debt. Or they took solace from the fact that many colleagues around their age were borrowing similar amounts for similar reasons.

While we don’t know their full circumstances, the fact that they needed to borrow indicates that they didn’t hold sufficient (liquid) investment wealth outside superannuation to finance their lifestyle purchases. It suggests that virtually all their wealth is now tied up in lifestyle assets, with little, or even negative, net investment wealth: the wealth that is required for financial independence. The $2 million borrower disclosed that apart from his (now beautiful) home, superannuation was his only other meaningful asset and that its value fell well short of the debt.

Financial independence may not be achievable

So, early financial independence clearly is not a priority for these three professionals. The likely reality is that they will never accumulate enough net investment wealth to be able to maintain the lifestyle they have become accustomed to. They will have to continue to work whether they like it or not!

They would like, at some stage in the future, to have accumulated sufficient investment wealth to be able to spend $250,000 p.a. indefinitely without the need to work – using our “rule of 25”, this implies a future target of $6.25 million in today’s dollars. After taking account of their superannuation and borrowings, their current net investment wealth is (-) $1 million i.e. they need to accumulate $7.25 million for financial independence.

Given their after-inflation, after-tax income of $600,000 p.a., the time it takes to achieve financial independence depends on:

The chart below shows the number of years required to accumulate $7.25 million for various returns [1.] and savings rates: 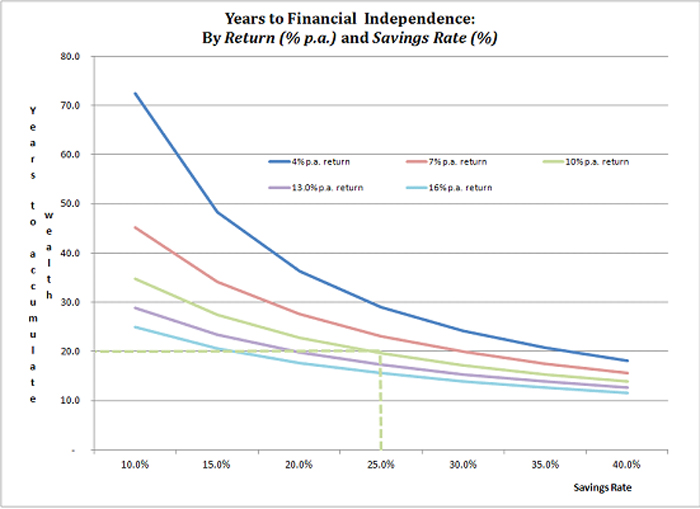 For example, focusing on a reasonable possibility, it would take almost 20 years to accumulate the desired amount of investment wealth at 10% p.a. and a savings rate of 25% (or $250,000 p.a.) [2]. A 55 year old would be 75 before financial independence is achieved!

While the reality is at age 75 the “rule of 25” is possibly too conservative, it is also unlikely that our three professionals would want to or be able to work as hard in their seventies as they are now. Earlier financial independence depends on them:

Are you “planning to fail”?

Now it could be that each of the three professionals is expecting a large inheritance to save the day. But when the suggestion was made that their focus on consumption and lifestyle assets rather than investment assets was committing them to having to work a long time into the future, the common response was that if need be they could always “sell down”.

While their stories represent a very small (but random) sample of high income, mid-late 50’s professionals, the commonality of their financial strategies raises a potential dilemma. If a large percentage of lifestyle asset-rich baby boomers is relying on “cashing out” over the next 10-20 years to finance a lifestyle that previously depended on a high income, will the demand for all these high end properties be there at current prices (in today’s dollars).

And should the market be particularly poor when the baby boomer has to sell, the concentrated nature of residential property means that they cannot sell a little bit at a time. A significant “haircut” may be required in an illiquid market, necessitating a downward shift in lifestyle expectations at a time when they should be enjoying the fruits of their hard work.

The fact is that some people choose to live for today and hope the future will look after itself. Others don’t even think much about the future but benchmark their lifestyle against those that they consider to be in a similar situation.

And then there are those, like our clients, who proactively manage their current consumption to give themselves future choices and, ideally, financial independence. They would agree with Winston Churchill’s famous war time quote:

“He who fails to plan is planning to fail.”

[1.] The modelling is based on after-tax and after-inflation returns. To help understanding, the returns shown on the chart are adjusted to pre-tax and pre-inflation equivalents assuming a tax rate of 30% and inflation of 3% p.a. [2.] Implies expenditure while working of $350,000 p.a.
: "rule of 25", asset-rich, financial freedom, financial independence, financial planning objectives, investment strategy, net investment wealth, professionals, wealth foundations, wealth management

[…] touched on in an earlier article, it may be that financial independence is not currently perceived as an objective worth pursuing, […]