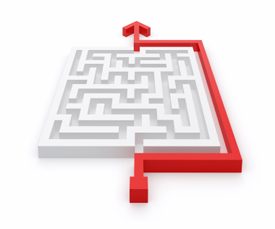 Just because you can doesn’t mean your should

Borrowing to buy property within a Self Managed Super Fund (SMSF) has been promoted by many within the advice industry as an exclusive opportunity you should seriously consider. And, while there can be occasions where this strategy makes sense, as a general rule the fundamentals just don’t stack up.

Back in 2007, the Government opened the door for SMSFs to borrow. The change was driven by the popularity of investing in instalment warrants (such as Telstra’s T3 offer). These investments had an element of gearing which created some confusion under the no borrowing restrictions of the Superannuation Industry (Supervision) Act. To over come this, the Government decided to remove the borrowing restriction.

This led to the development of borrowing arrangements to purchase property within an SMSF, which in turn has led to a surge in the supply of advice promoting this sort of arrangement. But a closer look at these arrangements reveals that there just aren’t too many structural advantages to borrowing within super.

Claimed benefits of borrowing within super often a “sleight of hand”

It seems that many of the (freely available) tax benefits of super are being claimed in order to make these financing arrangements look better than they really are. Take, for example, the recommendation to use concessional (pre-tax) contributions to fund the interest payments on the loan. Using this idea, you can argue that you get a 46.5% tax deduction on the loan interest expense.

Here’s how it works: 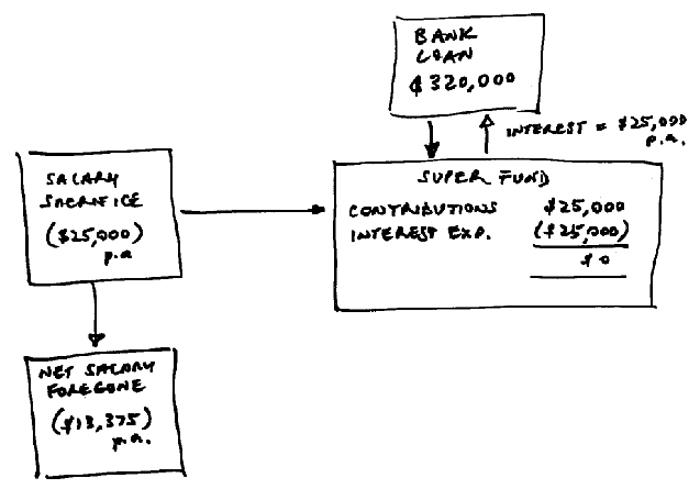 You may argue that this is a smart strategy.  But it relies on the benefit of the salary sacrifice arrangement – a benefit that is freely available without the need to enter a borrowing arrangement. The dubious logic serves to hide the reality that borrowing by a low tax paying entity is an undeniable negative.

When stripped of the “sleight of hand” of claiming the benefit of salary sacrifice as a benefit of borrowing, the actual after tax interest cost to the super fund is $21,250 (or 6.6%1) per annum. That’s more than 50% higher than the after tax cost if borrowed directly by the contributor. This structural disadvantage increases the breakeven hurdle return required from the underlying investment.

Many of these borrowing strategies involve internal gearing arrangements. That is, arrangements where one family member becomes the borrower and lends the funds to the super fund. It looks something like this: 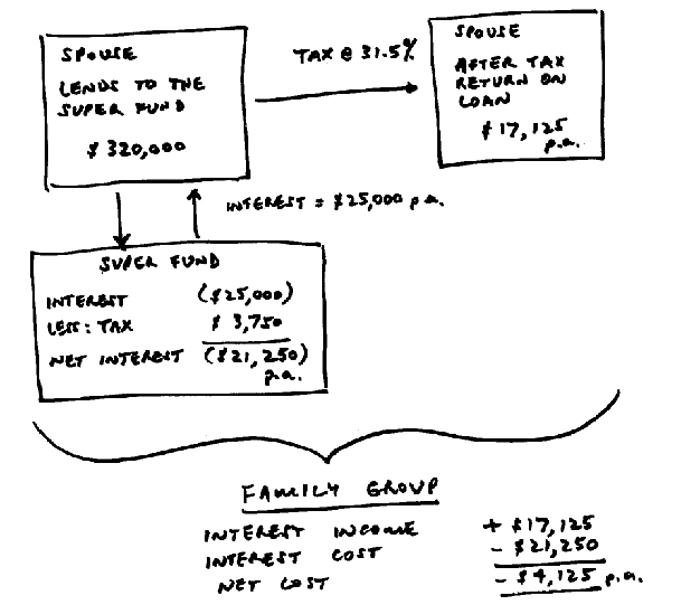 In this case, the family group carries an after tax cost of $4,125 (or 1.3%) per annum. Arbitrage opportunities can arise when you shift (deductible) expenses from a low tax payer to a higher tax payer, but in this case the arrangement is the other way around.

Of course, the logic used by the promoters of these arrangements is that the income and growth of the (purchased) asset will be taxed at a much lower rate (of between 0% – 15%). Therefore, put as many assets as possible into super (via debt funding). Yet this argument ignores the ability of the spouse (in this case) to contribute the $320,000 to super (rather than lend it).

Shifting assets into super is (generally) a smart strategy for reducing your lifelong tax burden. However, doing it by way of borrowing is significantly inferior to simply contributing the capital via concessional and non-concessional contributions.

But, what about the investor who doesn’t have the capital available to contribute and purchase the (property) asset outright? Is a super borrowing arrangement a smart strategy for them?

It really depends on whether they want to ramp up their investment risk. This has more to do with their tolerance, capacity and need for taking investment risk than any structural (dis)advantage of borrowing in super. The strategy could pay off but (as with all gearing arrangements) the success has more to do with the performance of the underlying asset than the benefits of the financing arrangement.

Borrowing to invest in Super: complexity that comes at a cost

Borrowing to invest in super can be a smart strategy in some limited circumstances. However, you need to make your decision with your eyes open, knowing that it carries an inherent (ongoing) cost. This cost can only be overcome by the strong growth of the underlying investment.

The increase in the supply of advice for these arrangements seems to be driven by flawed logic (that lays claim to benefits that are independent of the arrangement). These benefits can be accessed without having to undertake a borrowing arrangement.

Implementing these borrowing strategies is very complex and requires specific expertise. The promoters of these arrangements are willing to sell you their expertise (and, perhaps, for another fee, find you an appropriate property). We just think they’ve lost sight of the fact that the arrangements are inherently inefficient and rely on booming (property) asset prices.